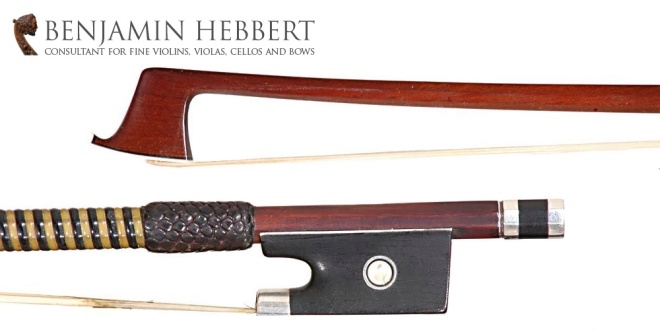 August Wilhelmj wrote the transcription of Bach’s 3rd Orchestral suite that spawned Air on a G’ String, but it is his re-orchestration of Paganini’s violin concerto in 1882 and the cadenza he wrote for it that are his significant contributions to the pantheon of great works for the violin. Benjamin Hebbert explores the fame of this extraordinary musician and takes a look at one of his performing bows.

Through twenty-first-century eyes it is difficult to separate the man from the myth of Nicolo Paganini. For such a titanic character of 19th century music it is unexpected to realise that he was already fatally ill with syphillis and mercury poisoning in 1828 – the year after Beethoven’s death – curbing his activity, and his eventual demise in 1840 was still relatively early in his century. For those who had heard him play, it was fleetingly during his tireless tours to endless audiences across Europe. His legend rested largely on the publication of his 24 caprices in 1820, their subsequent dissemination, and the fact that few musicians at all could match his virtuosity. Even performances of his work by other violinists was largely impossible during his own lifetime as he jealously avoided publication of most of his music. The less people encountered of him, the more famous he became. Publication of Paganini’s works came after his death. The first violin concerto written somewhere between 1811 and 1815 finally entered public circulation in 1840.

From this point on, the race was on for the ‘next Paganini’. His memory had established such a cult that for the remainder of the century it seemed unthinkable that a new and greater violinist would emerge. Hence even the greatest interpreters of Paganini’s works, ranging from Emile Sauret, or the ‘female Paganini’, Wilhelmina Norman-Neruda to August Wilhelmj would trade immediate fame for a lacklustre review in the annals of history: neither famous for their own compositions nor for famous concertos commissioned in their honour. Nonetheless, these were the violinists who would cement Paganini’s fame. They provided the kind of performances that allowed the likes of Conan-Doyle (born in 1859) to enable Sherlock Holmes to bore Dr Watson with ‘anecdote after anecdote’ about the extraordinary violin virtuoso. Wilhelmj was born in 1845 and was just seven years old when Henriette Sontag declared he would be ‘the German Paganini. His first public performance in 1854 in the court theatre at Wiesbaden made so significant an impact that Prince Emil von Wittgenstein immediately sent him to Franz Listz. Several years later when Listz wrote a letter of introduction for the young violinist to Ferdinand David in 1861, it was once again as ‘the future Paganini’. With his training at an end, the latter part of the 1860s say him embark on the touring life of a virtuoso travelling first to Switzerland then England, France, Italy Russia, Belgium, Sweden and crossing paths with Joachim and Berlioz along the way.

By 1875 he had become a public figure in England, playing at the memorial concert for Sterndale-Bennet given by the Royal Philharmonic Society, and heavily involved in the English cult of Wagner. He returned to Germany the following year to become the first concertmaster at Bayreuth, for Wagner’s first performance of Der Ring des Nibelungen. When he returned to England in 1877 it was his influence that encouraged Wagner to accompany him to conduct a festival of his works at the Royal Albert Hall (with Wilhelmj, as it’s concertmaster). From 1878 to 1882 he embarked on a world tour before retiring back to Germany. His semi-retirement still included occasional performances – famously in 1885 his invitation by the Sultan of Turkey to play before his harem, ‘the ladies of Seraglio’, but he concentrated on running a violin school in Wiesbaden. In 1893 he made his final move to London, becoming principal professor of violin at Guildhall School of Music in the following year. He remained in London for the rest of his life, and died in 1908.

I am delighted to offer for sale a bow by James Dodd that was one of Wilhelmj’s principal performing bows in the 1870s. James Dodd died in 1865 and the bow is representative of his final period of production, with the typically protruding Parisian eye and ‘goldfish’ mother of pearl that is seen throughout the finer works by James Dodd, James Tubbs and Samuel Allen across the late nineteenth-century. The dates are such that it is implausible that Dodd made the bow for the young Wilhemlj, and like heavy Dodd cello bows that became the golden-bullet for soloists such as Amaryllis Fleming and Jacqueline du Pre in the 20th century, it appears these bows suited a purpose that was entirely unintended when they were first made. In London, Wilhelmj was one of the first violinists to encounter the problems of the new generation of concert halls that developed in the late Victorian era, the chasmic Royal Albert Hall that opened in 1871 being significant amongst them.

Weighing in at 64 grams the bow is certainly one of the heaviest and one of the most unusual English violin bows that I have come across. The weight is reserved in the breadth of the octagonal stick, but as it resolves towards the tip, the bow recovers more conventional proportions resolving in a firmly Tourte inspired head following the very best of the Dodd tradition. The balance of the bow is excellent so that the bow does not feel heavy, but has an enormous amount sense of gravity on the string. Wilhelmj said that he ‘could produce a better tone on this Dodd than with any other of his bows’. Some French bows, especially by Pajeot in the 1820s have a similar quality, and it is possible that Dodd was following this concept. Wilhelmj was playing the bow in 1878. We don’t know when exactly he bought it and it seems paradoxical that he should have parted with such a favoured bow in the middle of his world tour. It is certainly deliciously tempting to look further back than 1878 and wonder if this was the bow he used as concertmaster in the inaugural performances at Bayreuth the year earlier.

Certainly the massive nature of the bow seems suited as much to the power required to perform Wagner as it is for the bombastic virtuosity of Paganini’s first violin concerto, a piece that Wilhelmj had virtually claimed as his own, and the extra energy in the bow would certainly have inspired confidence in a musician faced with the unrivalled scale of the Royal Albert Hall or the singular difficulties posed by the Festspeilhaus in Bayreuth. During his world tour, Wilhelmj had been attracted to Chicago by Adolph Rosenbecker a Prussian immigrant to America who organised and conducted the Turner Hall Concerts. Wilhelmj figured amongst the various soloists who played with the orchestra including Pablo de Sarasate and Eugene d’Albert. Rosenbecker was a serially entrepreneurial musician, also serving as concert master to a fledgling Chicago Symphony Orchestra and later the Chicago Grand Opera Company before moving to San Francisco where he became concertmaster of the symphony orchestra in 1912 until his retirement in 1915.

Having bought the bow from Wilhelmj in 1878, he passed it to his successor in the San Francisco Symphony in 1917. The strength of the letter which accompanies the bow is an indication of the very high regard with which it was held. His successor was no less than Louis Persinger who had been leader of the Berlin Philharmonic and the Royal Opera Orchestra in Belgium before moving to America. Shortly afterwards he would become the teacher to Yehudi Menuhin, Ruggiero Ricci and Isaac Stern. Papers accompanying the bow indicate that in 1936 it belonged to one Coleman Young of San Francisco, named on a Wurlitzer certificate. We know little about him except that he owned a violin by Jacob Stainer made in 1663. From there, the lawyer and amateur violinist Irving Golombe owned the bow in 1969. It returned to professional use thereafter as a highly prized bow until we acquired it for sale.