The Panormo family are amongst the most celebrated violin makers to ever have worked in London. Vincenzo, who came from Palermo in Sicily worked his way through Italy, Paris and Dublin to reach London. A violin by his Italian-born son Joseph reveals unexpectedly clear Neapolitan influence, and raises questions about the family’s identity as Italian violin makers in cosmopolitan London.

Vincenzo Panormo and his violin making sons, Joseph, Louis and George are the most celebrated dynasty of violin makers in England around the 1800 period. They are also one of the most difficult to navigate, mostly because of the enormous influence that the had on London making as a whole. As a result, the generation of makers who grew up around the John Betts workshop increasingly emulated Vincenzo Panormo’s vision of Italianate workmanship. Makers such as William Taylor and Henry Lockey Hill show an extraordinary affinity to Panormo-family work, and makers who encountered Panormo in his Dublin period  – especially Richard Tobin produce violins directly influenced by the short visit of the great Italian maker. Meanwhile even English trade violins of makers such as Matthew Furber improved towards a more Italianate repertoire of models in response to a growing taste for Italian violins, if not as a direct response to Panormo’s influence. Elsewhere, Robert Poulter in Hull and Matthew Hardie show an extraordinary affinity to Panormos work, and amongst the Leeds makers of the early 19th century, Dearlove, Thomas Absam, and Handel Pickard fake Panormo labels become a hazard of the territory.

As a result there are endless instruments that sit close to Panormo’s work, and barely a month goes past without another Pah!-no-more (as I tend to call them) coming into the shop for assessment. I have a basic rule: If it leaps out as being quintessentially Italian, but ends up being English in the finer details and footnotes, it has a chance of being a Panormo. If it’s the kind of instrument that is obviously English, but it punches above it’s weight to the point it could even be Italian, then it is almost certainly not. After that the real thinking begins. I even question if I have ever seen a single genuine example of the famous Vincenzo Trusiano Panormo labels with the ‘Armi di Palermo’ that characterise so much of what we understand of Panormo’s work, although the design is so strikingly unique so if only for that reason it is unlikely that they emerged out of nowhere. For the most part, these are nothing more than optimistic relabelling of a variety of slightly Italian-looking English or French violins, but over the years I have seen everything from the Voller brothers reshaping the corners of an 1820s London violin to pass as a Panormo (it had a Voller neck, which is why we could point the blame), all the way through to George Wulme-Hudson’s most deceptive work producing full-on forgeries for sale to dollar-rich Americans in the 1940s. Occasionally I’ve seen a nice fake label sitting in the genuine thing.

Vincenzo’s instruments seem to be guided by a genuine and deep knowledge of the centuries of violin making before him, and he seems always to reach out to create characterful improvisations around an Italian ideal. The wood is invariably more interesting than others, either because it directly reflects a great Italian instrument, or because he revelled in the interest brought about by a non-standard billet. He is famously reputed to have wood salvaged from a billiard table in Dublin: The last remaining 17th century billiard table (at Knole House in Kent) reveals a bed of several levels of slab-cut staves of wood latticed over one and other to provide a stable and flat gaming surface: The violins from his Dublin period have wood that corresponds to the legend. He may simply have been obsessed with the perceived advantages of old wood to the point that he preferred aged timber over aesthetic beauty. Nevertheless, the effect, along with consciously large pins in the back of his instruments seems to distance his work from England of the decades around 1800 in time as much as geography, much more centred around the generality of violins produced in the mid-eighteenth century, and it may be for this reason that many misinformed and unscrupulous dealers in the past ascribed them to dates from the 1740s onwards.

Joseph Panormo’s (c.1763-1837) work is extremely rare. This is explained in large part because he was working for his father at least up until his late thirties, whereupon he established his own workshop in 1801 in New Compton Street. In reality, he was probably still intimately connected to his father’s workshop right up to Vincenzo’s death in 1813 when Joseph would have been about fifty, and his premises were only meters away from his brother Louis on Bloomsbury High Street, with whom he made guitars indicating a tight-knit family community. Several violins legitimately labelled and accepted as Vincenzo Panormo around the 1800 period are further signed or monogrammed ‘JP’ on the interior. The quality is to be expected for someone who had spent the best part of half a century at his father’s side, and the transition from the hand of the father to the hand of the son is a gradual one seen through Vincenzo Panormo’s later works. The same transition is mirrored in the emerging characteristics of any of the dynasties of violin making, and strong characteristics of a younger maker can begin to emerge years before they were making instruments in their own right. 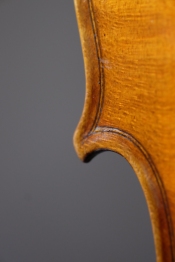 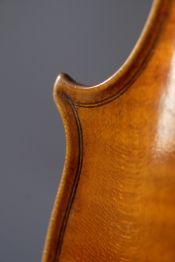 From the back, Joseph’s violin of around 1820 has much of the quality expected of his father’s work. The choice of strongly grained maple is reminiscent of the Gaglianos particularly under the strong orange-yellow varnish which seems to quote them directly, and the slightly more constrained pins have a more specific relationship with classical Cremonese making than the ‘generally Italian’ look of his father’s work. Joseph’s observations go further, and he seems to be more concerned with the edgework and corners of the violin. The crisp chamfers of the edges separate his work from his father’s and the corners are much more squared than on other instruments, his awareness of the delicacy of these features appears in the very narrow and delicate purfling that he uses to attenuate these details. The slightly drooping corners are a deliciously Stradivarian touch. It may be wishful thinking to ascribe these traits to any particular Stradivari rather than an amalgam of observations, but it shows a heightened awareness of Stradivari’s characteristics at a time when more London makers – those in the Betts circle especially – were emulating his models to an unprecedented degree.

The same precision is revealed on the head, which comes from a common template used by father and son. In keeping with his looser hand and choices of wood, Vincenzo’s scrolls feel hastily made with a characteristic roughness revelling in the faults of the wood. Crisp and clean scrolls appear throughout Vincenzo’s recognised work, which can possibly all be ascribed as Joseph’s hand. The belly of the instrument shares the edgework detail of the back (although it is now slightly worn and less distinctive) but his interest in following a Stradivarian ideal finds it’s limits. The soundholes are rather broad and very upright following a pattern that emerges in Panormo’s work in the earliest Stradivari-pattern violins made by Vincenzo in Paris, and that emerges over and over again, but the placement of them and their scale repeatedly fits rather awkwardly from the perspective of an eye trained in seeing Stradivari’s work. The result is a weakness in that they dominate the view of the violin. Knowing that the violin is by Panormo, it’s difficult not to blame this kind of fault on as an ‘English’ feature, but this would be wrong and in reality soundholes are one of the easiest details to get (mostly) right, and most English violins of the period tend to achieve that much precision, even if the rest of the instrument is entirely devoid of Italian characteristics. Instead, the better comparables lie in the later examples of Neapolitan workmanship by the Gagliano family in which these awkwardly positioned, wide, upright, faintly Stradivarian soundholes feature fairly routinely. 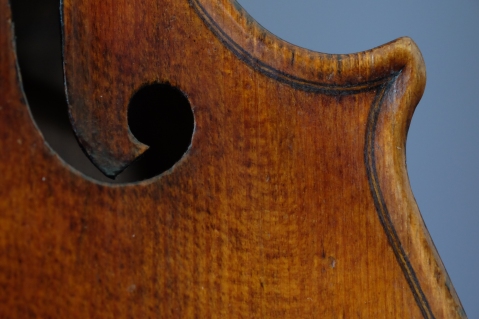 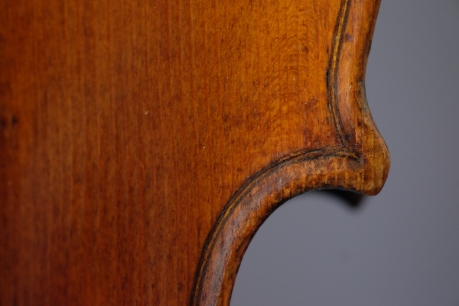 Joseph’s brother Louis was acutely aware of the importance of promoting instruments made in a foreign manner, consciously styling himself as ‘The only maker of Guitars in the Spanish Style’, whilst many of Vincenzo’s genuine labels make direct allusions to his status as an Italian in London. It seems that Joseph also felt that he occupied that special status continuing in his father’s place. Whilst the conservative wood choice of his violin inevitably draws the eye to it being an English instrument and perhaps some elements of Stradivarian flair demonstrate further obsessions that were absent from 1800-period of Italian making, the violin seems overall to be a clear reaction to the best Neapolitan violins reaching England at the time (‘Giuliano’ of Naples is listed amongst the ‘noted’ Italian makers in at least one London source from 1816). This brings us back to one of the great legends of Panormo’s original training. It seems highly unlikely that Vincenzo worked with the Gaglianos when he left Sicily, and there is no evidence for this in his early work. Instead it seems that the more Neapolitan a Panormo violin is, the later it is likely to be. In sum, Joseph’s violin seems compellingly set around a Gagliano ideal showing the same bold understanding of Italian arching that makes his father’s instruments so sought after. The almost clinical edgework, scroll and the pins in the back all point towards Cremonese influcence, and the mixture of the two schools of influence gives the violin it’s unique and identifiable appearance. Perhaps Joseph who was also born in Italy expressed self-conscious affinity to those makers working closest to the family’s celebrated origins across the Straits of Messina from Naples, in Palermo in Sicily. The comparison of his violin to those of Nicolo Gagliano at least, draws compelling similarities.

Acknowledgments: I am grateful to endless discussions about Panormo and other English makers with Andrew Fairfax. By good fortune, this violin came to me days before the PANORMO exhibition hosted in London by Tarisio in October 2016.