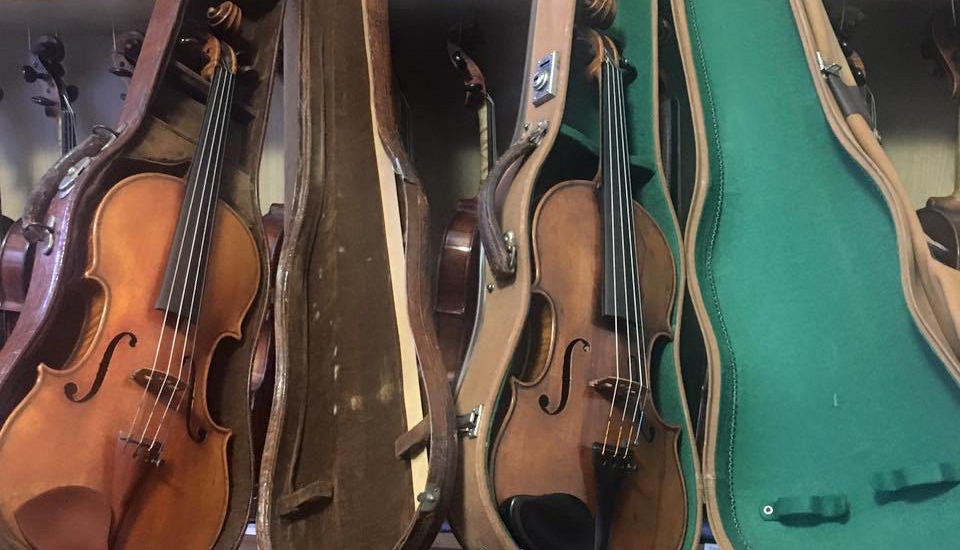 How much has this violin been played?

One of the questions that I frequently hear as a violin dealer is whether a violin has been played regularly or not. It is one of the questions that well intentioned teachers seem to think should be asked, and that should have some material effect on the choice of an instrument, however it is often a question that a dealer doesn’t have an answer for, and with experience of setting instruments up and working to get the best out of them it may not be the most important question in the decision to buy an instrument.

To some extent this relies on the phenomenon of ‘playing in’ and the belief that an instrument needs to be played to sound at its best. Generally speaking, where ‘playing in’ does have an effect is over a short period of hours or days, more akin to ‘waking the instrument up’ rather than a continual process of pumping music through its body for hundreds of years. I have known of instruments that have not been played for decades that have hit the ground running with a superb sound from the moment they’ve had a new bridge and soundpost. Occasionally an instrument may need to settle into a new setup, irrespective of whether it has been played continually or not, so it may need soundpost adjustments over the first weeks after a restoration and at an extreme, but this again has nothing to do with how long it’s been played for: A stringed instrument is a fairly organic object.

On the other hand, a great deal of what we call ‘playing in’ is the influence of a new violin on the musician. Of course you have to learn how to get the most out of a different violin – figure out how it reacts differently to the one you are used to, discover that to get a familiar type of sound you have to approach the instrument differently, and understand how it offers more. This isn’t always easy or obvious. If you are fairly rigid in the way you play, and expect a particular kind of response from your instrument, you may find some instruments unsatisfying, but once more this isn’t really a product of how long they have been played and by whom.

When it comes to the playing history of an instrument, there is often a sentimentality of wanting to be reassured of a purchase by knowing who owned it last that is justified by the few famous instruments that are sold with provenances that go back hundreds of years. Sadly those are the tip of the iceberg in violin sales, and the vast majority of instruments don’t have any provenance at all. Unless I buy an instrument directly from a musician, I won’t know who owned it last, and auction houses in particular make client confidentiality the absolute unbreakable rule for how they work. If I do buy an instrument from a musician or act on their behalf, they very often want anonymity and if it comes from a musician’s estate my point of contact may be the solicitor or family members who have entrusted the instrument to me in order that they aren’t involved any further in the sale, so there is often a huge discrepancy between the information a prospective buyer wants (and may think they are entitled to) and what I can give, morally and lawfully.

In terms of whether that information is meaningful, that raises further points. I have known of instruments that ostensibly belonged to relatives of long-dead musicians, but were loaned to professionals for years. Contra-wise, I have sold the second violins belonging to accomplished musicians who never had very much need to play them over the decades they used them: Yehudi Menuhin’s vast sale of instruments at Sotheby’s in 1998 was almost completely instruments he had picked up and barely played. The Albert Cooper sale, ten years later was instruments in the private collection of a dealer that he had accrued over decades, yet many of them had been continually loaned out to prominent professional musicians. We may be privy to certain information about an instrument – if it comes to us with broken gut strings, then evidence tells it all, if a customer put a fairly new second hand set of strings on it before walking into the violin shop, we may be none-the-wiser to it’s past, but is it relevant to how it plays?

At the end of the day, a violin might not agree with you. It may need a sound-post adjustment, a new bridge or bass bar, or just a different set of strings – alternatively it may simply not be your voice, but if after visiting violin shop it is interesting enough to be on your own shortlist, the amount it’s been played in the past has very little to do with how it will perform in the future. Very often when a musician assumes that an instrument hasn’t been played much, it is shorthand for the fact that they can sense a greater sound in the violin than it is letting out, or that it would be better suited to their taste with a few adjustments. Very often it means that if the violin was just a tiny bit different it would be the kind of instrument they are looking for. In any of these cases, there is normally a more elementary diagnosis that can be remedied. That should be where the conversation with the violin dealer starts, not where it stops.

If you have concerns about the nature of the sound, talk them through and look for a solution. Very often a good dealer will be sympathetic to your tonal requirements and may be able to work with the violin to make it just that bit better. Otherwise as a musician and a buyer, you may be walking away from the ideal instrument, and committing yourself to endless further searches, frustration and time in locating a better instrument.

In this video, Luca Fanfone plays one of the world’s least played in violins, Paganini’s “Il Cannone” Guarneri del Gesu. Not much to grumble about…