John Joseph Merlin was one of London’s most significant inventors and entrepreneurs of the late eighteenth century. Amongst automatons, clocks and a bewildering variety of inventions he may well have paved the way for Charles Babbage‘s invention of the computer. He produced musical instruments of unparalleled ingenuity. He also held the secret to Cremonese tone – or did he?

Charles Babbage (1791-1871) is considered by many to be the father of the computer, inventing the Difference Engine in the 1820s which could perform programmable mathematical calculations – the first mechanical computer, but his introduction to the world of machines came as a Devon schoolboy visiting Merlin’s Mechanical Museum, just off Hanover Square in London. According to Babbage’s own account:

During my boyhood my mother took me to several exhibitions of machinery. I well remember one of them in Hanover Square, by a man who called himself Merlin. Iwas so greatly interested in it, that the exhibitor remarked the circumstance, and after explaining some of the objects to which the public had access, proposed to my mother to take me up to his workshop, where I should see still more wonderful automata. We accordingly ascended to the attic. There were two uncovered female figures of silver, about twelve inches high.

One of these walked or rather glided along a space of about four feet, when she turned round and went back to her original place. She used an eye glass occasionally, and bowed frequently, as if recognizing her acquaintances. The motions of her limbs were singularly graceful.

The other silver figure was an admirable danseuse, which a bird on the forefinger of her right hand, which wagged its tail, flapped its wings, and opened its beak. The lady attitudinized in a most fascinating manner. Her eyes were full of imagination, and irresistible. These silver figures were the chef-d’oeuvres of the artist: they had cost him years of unwearied labour, and were not even then finished”

After the death of John Joseph Merlin (1735-1803) his collection of mechanical wonders was auctioned off, and Babbage managed both to purchase the danseuse, and eventually to complete her to display her prominently in his house. (His other The implication: That Merlin’s genius for mechanical devices played a significant part in the birth of modern computing – is it too much to call him a kind of grandfather figure if Babbage is seen as the father of modern computing. Several of Merlin’s extraordinary inventions survive, chief amongst them the Silver Swanthat he made in 1773, which is kept at Bowes House Museum. Watch and be amazed!

Merlin’s genius for inventing things went well beyond automatons, into such devices as ‘Gouty Chairs and Morphices’ ’Sleeping Chairs for infirm persons’ ‘patent Rotisseurs’, an ‘Invention that restores paintings to their original beauty’, a ‘two-wheel chariots for one horse only’ and even a horseless carriage which he ‘…kept in motion by means of a windlass and it went with tolerable facility…’ In musical circles, Merlin appears to have enjoyed considerable celebrity – he was friends both with Johann Christian Bach in London and the music historian Charles Burney, whilst there is some discussion that the portrait of him painted by Gainsborough – himself both an avid musician and collector of instruments – was commissioned in return for a musical instrument made by Merlin.

The portrait of Johann Christian Fischer, Thomas Gainsborough’s son-in-Law shows a kind of square piano inscribed Merlin Londini Fecit on the name-board. For all his other inventions, musical instruments appear to have been the main commercial element of his entrepreneurial activity. Amongst his early inventions, he seems to have been credited with the invention of the Pentachord, a kind of five stringed violoncello which Sir Edward Walpole equally takes credit for (or at least credited for bringing it to prominence as an idea): It was demonstrated by Karl Friederich Abel as a ‘newly invented’ instrument in April 1759, before Merlin’s arrival to England and James Cervetto later praised the instrument, declaring “I know not a more fit Instrument to Accompany the Voice”. The example shown in the 400 Years of Violin Making in the British Isles Exhibition (pages 256-57 in The British Violin) is by Joseph Merlin. In 1774 (bearing in mind that the earliest English grand piano is from 1766) he patented designs for an instrument that would function both as a pianoforte and harpsichord.

One example has a Russian provenance to Catherine the Great and survives in the Deutsches Museum in Munich which further incorporates a clockwork device for transcribing the notes played onto a roll of paper (a way of mechanically outputting information that is very much a precursor to Babbage’s concept of a punched card input for his Difference Engine 2). Although he employed workmen to complete his keyboard instruments, the carcasses and keywork seems sufficiently generic of London work at the time, that it seems likely he was more involved in modifying semi-finished instruments with his inventions and concepts. Notably in 1776 he sued Ephraim Celsson his former assistant for making and selling combined harpsichords made to his patent, and in another instance, a harpsichord made by the celebrated London maker Jakob Kirckman made in 1758 has a swell mechanism that was added by Merlin in 1779 (Boston Museum of Fine Arts). Various newspaper adverts allude to his inventions as improvements that could be fitted to existing instruments. 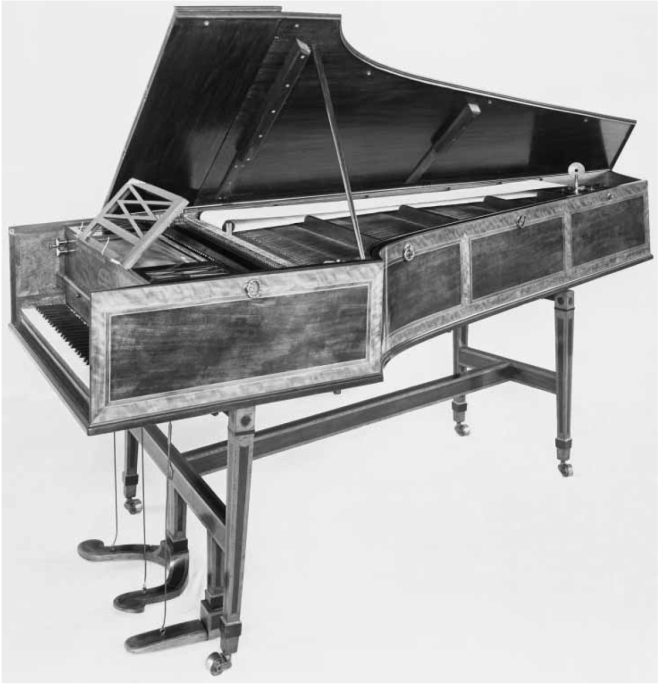 By January 1775 Merlin’s workshop and house was at 61 Little Queen Ann Street moving to 66 Queen Ann Street East in 1778. In April he placed advertisements announcing ‘a new invented Fiddle, with five strings’ and ‘a new improvement to violin design’ described as ‘a very simple contrivance by which the pegs cannot get loose, and will help the tuning with a wonderful facility, safety, and accuracy’. He also claimed thathe could ‘also improve the worst Fiddle to that degree as to be equal to the best Cremona’. The previous month he announced a new stringed instrument, the Ipolito, said to have been invented by Mr Barthélémon nad made by Merlin – potentially a violin with an additional c-string. In August 1779, Merlin listed ‘… the various instruments and pieces of mechanism, which he has constructed, such as his great collection of Patent Piano Forte, double Bass harpsichord, and portable instruments call Celestinettes, and his new Violins, Tenor and Bass, and improves violins, tenor, and bass, tho’ ever so bad, makes them equal to the best Cremonea…’

Merlin’s violins are vanishingly rare. Lot 229 at Sotheby’s Early Music auction on 10 November 2004 was a violin of 1776 labelled “Josephus Merlin Cremonae Emulus No. 121, Londini 1776, Improved, No.66, Queen Anne Street East, Portland Chapel”. The violin is in most respects just a conventional London trade violin of a Stainer-pattern, although the length of back is small at 349mm which is rather unusual for English instruments generally speaking. The consensus as suggested in The British Violin is that these instruments were probably made by John Carter, although ‘two New Fiddles not finished’ were listed in the 1783 posthumous inventory of his assistant, Louis Lavigne Verel. The absence of any observable improvement within his ‘improved’ violin is a bit of a mystery, but it may just be possible that the improvement came about in a certain type of string.

A second violin, illustrated here, is an entirely different prospect. It has a magnificent label: “MERLIN/CREMONA EMULUS/INGENIEUR pour les INSTRUMENTS/de MUSIQUE et de MATHEMATIQUE/et HORLOGER en grand et en petit/fait toutes Sortes d’inventions/ MECHANIQUES, London 1785/Princes Street, Hanover Square” set between engravings of a complex armillary sphere, and a sophisticated clock evidently musical on account of being shaped like a lyre. Made in 1785, the violin shows Merlin’s eccentric flair for innovation. Once again it has a small body length of 344mm, and the proportions are somewhat deranged with an exceptionally wide bottom bout and a very narrow upper half – 151mm over the top bouts, 212mm on the bottom and 102mm at the narrowest point. By contrast to his keyboard instruments, whose veneer finishes make them amongst the prettiest looking instruments of the English school, there is surprisingly little effort to produce something of high quality when compared to the more beautiful work being produced by contemporaneous makers such as Joseph Hill and Henry Jay especially as well as the relatively fine work on his surviving Pentachord. Perhaps his aim, as alluded to in his advertisements was to prove the worth of his inventions by producing “bad” instruments following his claim that he could “also improve the worst fiddle to that degree as to be equal to the best Cremona”, for there are adverts of 1783 (in The Morning Post) and 1784 (In the Morning Herald and Daily Advertiser) which are quite explicit in mentioning that he had Cremona violins amongst his goods for sale (becoming the first Queen Ann Street dealer of such things as far as I know).

Ever the showman, not only does the new design seem more fanciful than grounded in any particular science, if any of these violins could be shown to remotely compare to a Cremonese violin, the roughness of them would aid in providing the impression of obvious difference. Certainly amongst his immediate circle, Charles Burney and Thomas Gainsborough were both connoisseurs owning Cremonese violins, so it is not as if he was playing to an ignorant market (all the time at least). The rudimentary acoustical experiment in the shape of the 1785 violin makes a good sound and is not unappealing in its own right, but needless to say it didn’t change the way that instruments were conceived of, and it is simply coincidental, if not downright ironic, that it’s date of manufacture coincides with Antonio Bagatella’s publication of his Regole per il costruzione de violini’ a first serious and structured attempt to apply methodology to understanding Cremonese design.  Nevertheless this was a period of fascination with Cremonese violins amongst the English, as evidenced for example by the advertising trade cards of John Betts and Richard Duke (see your copy of The British Violin), and however trivial the instrument can be seen in the context of a wider picture of efforts to reproduce the quality of Cremonese instruments, it serves the purpose of demonstrating how interesting this had become to an English audience. Merlin’s violins might be consigned to the dustbin of curiosity, along with Sultanas made by Perry in Dublin, or Thomas Howell’s oddly shaped patent violins made in Bristol around the 1830s and 1840s, but the invention of the roller skates gives Merlin’s involvement with the violin a peculiar immortality of its own, as related in 1825 in Thomas Busby’s, Concert Hall and Orchestra Anecdotes::

“One of his ingenious novelties was a pair of skaites contrived to run on wheels. Supplied with these and a violin, he mixed in the motley group of one of Mrs Cowley’s masquerades at Carlisle House; when not having provided the means of retarding his velocity, or commanding its direction, he impelled himself against a mirror of more than five hundred pounds value, dashed it to atoms, broke his instrument to pieces and wounded himself most severely”

A detailed history of Joseph Merlin is given in The British Violin, (pages 50-51) and a pentachord, his five-stringed cello (pages 256-57), was included in the exhibition. I am indebted to Margaret Debenham’s “Joseph Merlin in London, 1760-1803: the Man behind the Mask. New Documentary Sources” Royal Musical Association Research Chronicle, 2014, which is easily accessible online for many of the sources cited in this article.