Yehudi Menuhin: A Life in Pictures

Almost 20 years ago I a chance opportunity allowed me to acquire the photographic archive of the London Illustrated News and the Daily Mail for Yehudi Menuhin, when during a brief moment the archives were in private hands. During the Menuhin Centenary in 2016, we exhibited one of the most comprehensive photographic narratives of Menuhin’s life in London during the Menuhin competition, and we’ve decided to share them online, along with a few other press photos that we’ve picked up along the way.

These are the actual photographs used to produce the great London newspapers, the Daily Mail and London Illustrated News. They bear the marks of being used – sometimes multiple times, with crop marks, air-brushing, and an enormous amount of data on the backs which is sometimes just as interesting as the image itself. Most of the collection is from the golden-era of the 1930s – 1950s, but there are important photos from his London debut in 1929. Amongst my favourites are the reflective nature of his street portrait with Oistrach. It is astonishing to think that the Cuban Missile Crisis was just moments away, and at a time that the world seemed on the brink of catastrophe, these two musicians represented the brotherhood between Russia and the West and the hope for peace. As a violin maker there is something poetic about the fate of William Robinson, the man who made the violin from Churchill’s cigar boxes, to see him airbrushed out of the portrait in 1958.

From time to time we find other press photographs to add to the gallery. A testimony to a violinist who continues to inspire generations years after his centenary. 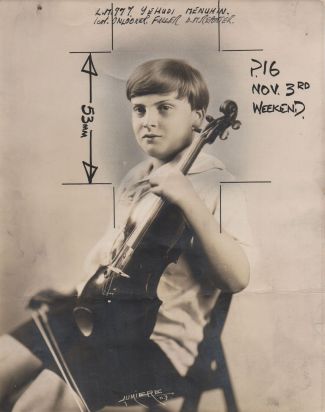 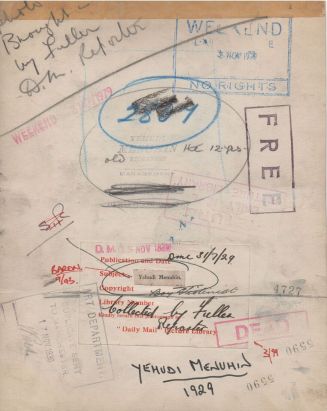 31 July 1929: Samuel Lumiere’s Studio Portrait
Menuhin’s studio portrait by Samuel Lumiere was used around the time of Menuhin’s London debut. airbrushed for publication and extensively used by the papers from 1929 into the 1970s. 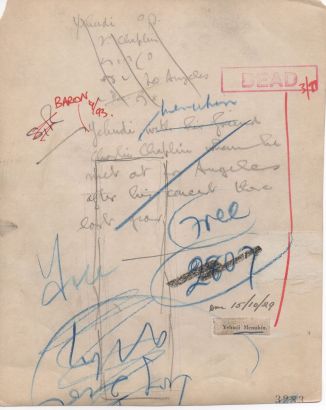 15 October 1929
Yehudi with his friend Charlie Chaplin whom he met at Los Angeles after his concert there last year.

1 November 1929: 12 Year Old Genius in London
The caption reads: 12 Year Old Genius in London: Today’s picture of Yehudi Menuhin the 12 year old violinist who has been hailed as a genius and the greatest prodigy since Paganini and who as arrived on a visit to London for the first time where he will give 3 concerts. At the age of 6 he was playing with the San Francisco Symphony Orchestra. 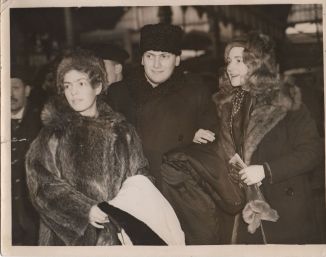 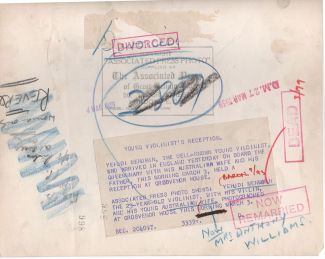 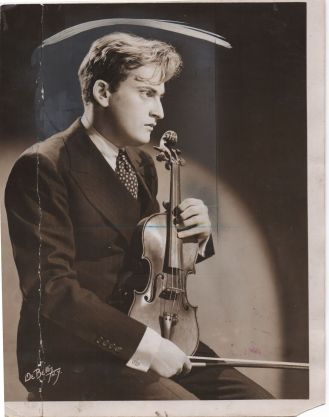 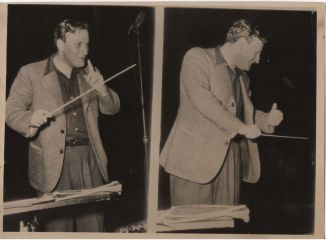 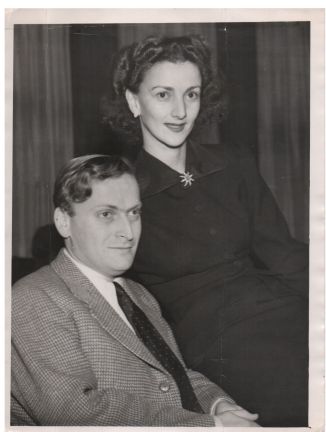 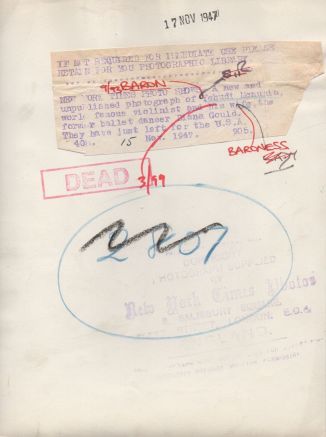 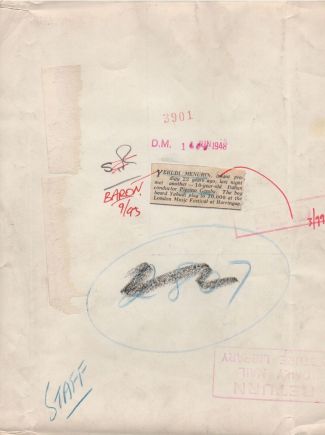 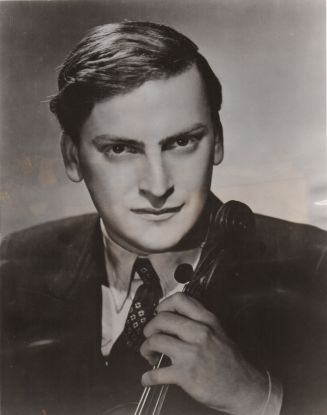 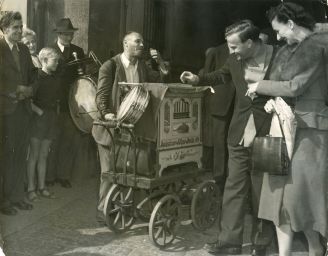 19 September 1949: We Musicians Must Stick Together
The caption reads: We Musicians Must Stick Together. Yehudi Menuhin, the world famous violinist, rewards a Berlin Barrel Organ player with a bog tip for his serenade ass the former leaves Titania Palace after a rehearsal with Berlin’s Philharmonic Orchestra. September 21. Menuhin arrived in Berlin September 19 for a concert tour. At right is Mrs. Menuhin. 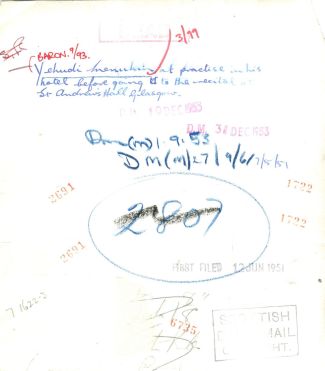 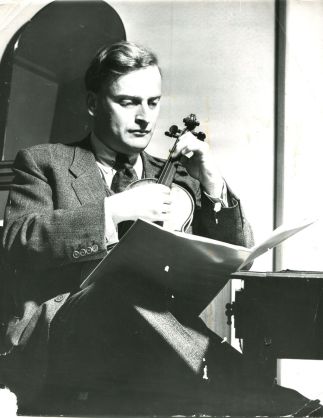 7 May 1957: Menuhin in Scotland
The caption reads: Yehudi Menuhin at practise in his hotel before going to the recital at St Andrews Hall Glasgow. 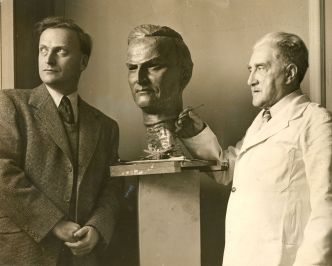 9 June 1953: Portrait by Robin Adler
The caption reads: Violinist and musician, he began playing the violin at the age of four, appearing at the age of seven a a soloist with the San Francisco Symphony Orchestra. Before his 21st birthday he retired for two seasons.

12 April 1956:Yehudi Menuhin with his wife
The caption reads: Yehudi Menuhin with his wife. Before her marriage to the world-famous violinist, Mrs. Menuhin was Miss Diana Rosamond Gould, daughter of the late Mr. G.L.E. Would and the late Lady Hercourt (Evelyn Suart). The Menuhin’s were married in 1947; they have two sons. Yehudi Menuhin had been married previously. Portrait study by Dorothy Wilding. Dorothy Wilding was one of the foremost portrait photographers of the era. Her 1952 image of Queen Elizabeth II becoming the most familiar of all portraits of the monarch.

2 February 1958: In the Groove
The caption reads: Yehudi Menuhin one of America’s favourite violinists will be guest artist for the Portland Symphony’s first 1958 program January 13 at the public auditorium, Theodore Bloomfield conducting. He will be heard in Dvorak’s violin concerto. 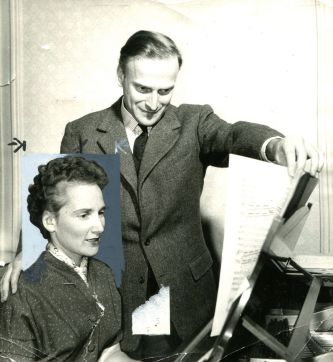 25 May 1957: Yehudi & Hebhzibah Menuhin
The caption reads: The famous violinist turning the pages of music for his sister, Hephzibah, who is a concert pianist. 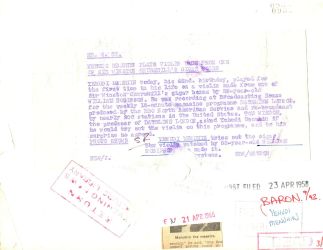 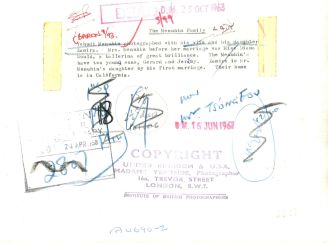 24 April 1858: The Menuhin Family
The caption reads: The Menuhin Family. Yehudi Menuhin photographed with his wife and his daughter Zamira. Mrs. Menuhin before her marriage was Miss Diana Gould, a ballerina of great brilliance. The Menuhin’s have two young sons, Gerard and Jeremy. Zamira is Mr. Menuhin’s daughter by his first marriage. Their home is in California. 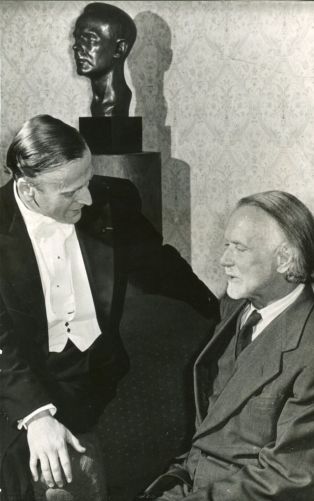 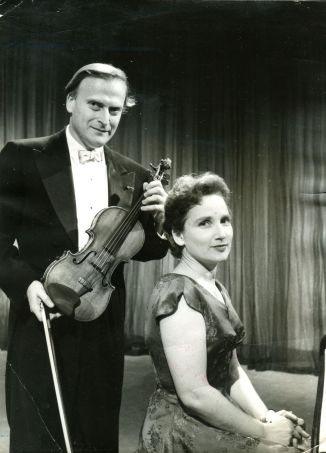 4 March 1960: Yehudi and Hephziah Menuhin
The caption reads: The great violinist Yehudi Menuhin pictured with his sister, who is a distinguished pianist. 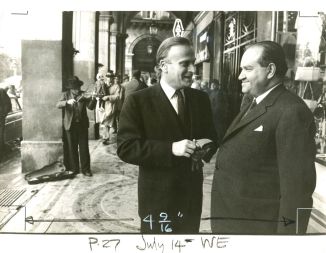 14 July 1962: The Cold War
The caption reads: A roadside fiddler plays. Two men stroll by, then pause. And one goes back to add a coin to the handful in the violin case. To the beggar, it means only that supper is a little more certain. He will never know that his squeaky offerings have just filled a little corner of musical history. The man who gave him the coin is an American. He holds the French Legion of Honour. His companion is a Russian. He holds the Order of Lenin. The differences are just two variations on a theme. The two men have something in common. They are the world’s greatest violinists. From the West, Yehudi Menuhin. From the East, David Oistrakh. They met in Paris, where for a brief moment their paths crossed that of a fiddler to whom the world had brought neither fame nor fortune. At the time tensions between the West and the Soviet Union were reaching crisis point and the Cuban Missile Crisis was on the horizon. An extraordinary gesture of peace between the superpowers at a time that military and political willpower seemed to be turning in a more sinister direction. 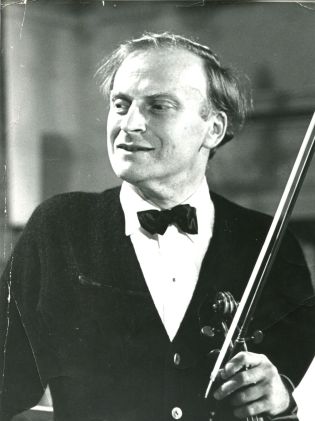 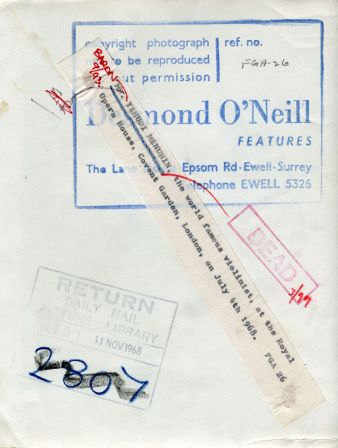 22 October 1969: Ghandi Centenary
The caption reads: Ghandi Centenary, London: A reception was held at the British Museum, London, today in connection with the centenary of the birth of India’s pacifist leader Mahatama Gandhi. Seen at the reception examining a spinning wheel used by Gandhi to fashion the thread which his nieces used to make a table mat as an engagement gift for H.M. Queen Elizabeth and Prince Philip, left to right: famous violinist Yehudi Menuhin; actress Vanessa Redgrave, originator of a concert in tribute to the Indian leader to be held at the Albert Hall later this month; Indian High Commissioner Apa Pannt, and Lord Louis Mountbatten, close friend and confidant of Gandhi. Miss Redgrave left her recently-born son at home briefly to attend today’s reception. 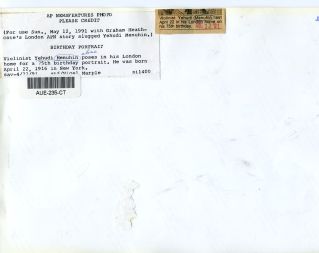