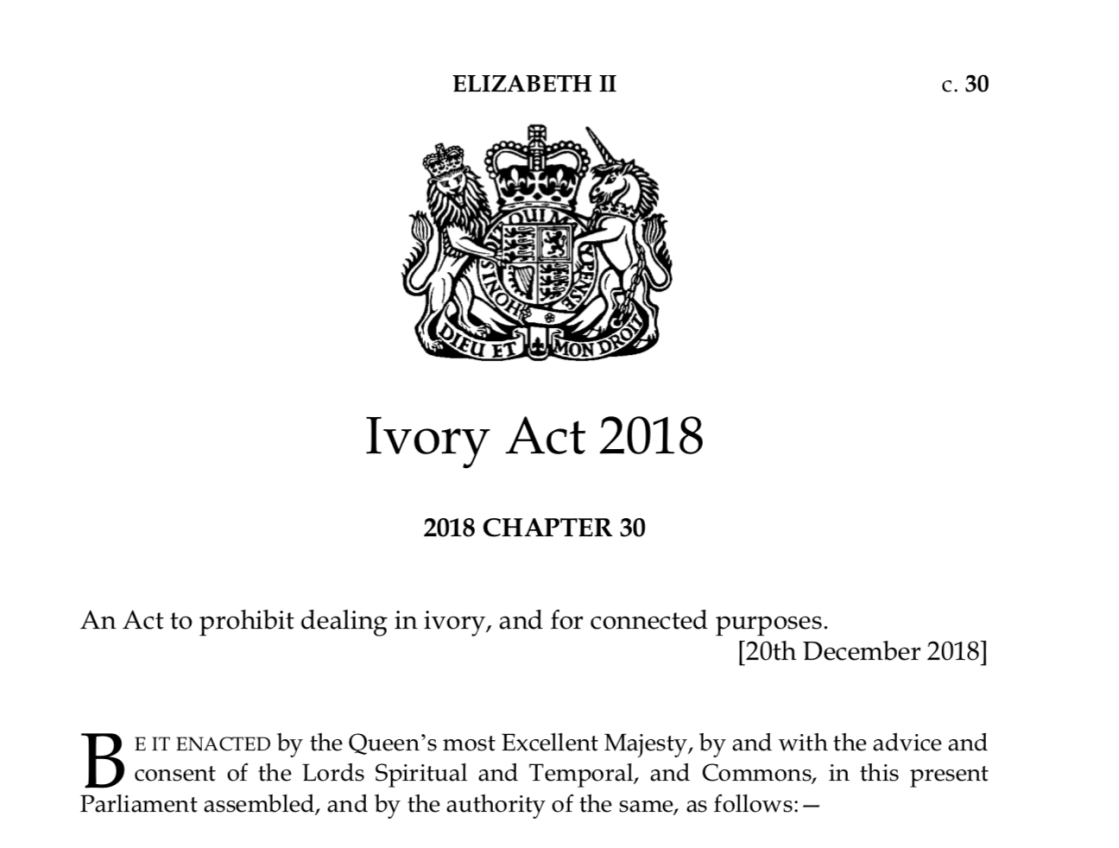 Why Musicians should appeal against the Ivory Act.

Benjamin Hebbert on the ethical tightrope of representing musician’s interests and campaigning for exemptions to the ivory act, and explains why you must act and sign the petition to appeal the 2018 Ivory Act’s Registration Requirement if you want to stamp out the illegal trade that continues the slaughter of elephants. Sign the petition here.

With my hat on as chairman of the British Violin Making Association, I had the responsibility of writing a submission for the public consultation on the Ivory Bill back in 2017 before it was brought to Parliament. The process left me with a pit in my stomach, for laudable as the musical world is (and it is my world), as I wrote my detailed deposition to the United Kingdom’s Department of the Environment, Food and Rural Affairs (DEFRA) I felt my stomach twisting in knots at the idea of challenging a bill intended for saving some of the most beloved creatures in the world from extinction. Was it really worth messing around with this bill for the sake of making life easier for musicians?

I suffered my own existential crisis of conscience, but then a sudden realisation dawned, and there was all the more importance to complete my analysis and send it off. In my summary of the situation I could see how the government had failed to assess the scale and nature of this particular problem as it related to musical instruments. There was a real risk and unintended consequence of diverting enormous resources away from the urgent fight against smuggling and poaching thus undermining rather than supporting the goal of wildlife conservation. Along with fellow voices campaigning from within the musical world, we worked to make our voice heard. The market in musical instruments does not support the trade in illegal ivory in any form, and does not add to perceptions of prestige that creates demand and drives the price on the illegal market.

The DEFRA public consultation drew the largest response of such an exercise ever, receiving  71,238 responses. Even when you eliminate 60,613 campaign responses that was still a lot to wade through, and somehow we managed to get our voice heard. The government was under an enormous amount of pressure to do the right thing, but sometimes the simple way forwards is not the best ecologically – you can’t crack an egg with a hammer, and that is what they were trying to do. Ultimately, the rights and wrongs of this petition are for government to decide. We, the musicians, and the technical support behind the musical world (makers, restorers, repairers and dealers) simply want to be able to state our case to government clearly.

Ultimately, the rights and wrongs of this petition are for government to decide. We, the musicians, and the technical support behind the musical world (makers, restorers, repairers and dealers) simply want to be able to state our case to government clearly.

Ivory was introduced to the world of violin bows centuries ago when there was no question about the ethical use of it. As the modern kind of bow evolved around 1800, an ivory faceplate, about the size and thickness of a fingernail became a clever addition to it. If the bow was dropped on its tip, the ivory would fracture under the force, reducing the likelihood that the bow itself would break, hence many have survived since the nineteenth-century that would have otherwise been destroyed. It had a decorative element to it as well. Other bows were tipped with nickel, silver, gold, ebony and occasionally with mother-of-pearl, but these were designed with thinner dimensions to counteract the variables in weight and balance, so it is not as simple as replacing ivory with a different material. Even titanium is too dense and so affects the playing qualities of a bow if used as a replacement, as a result we would prefer to repair and conserve existing ivory components of old bows in a minimally invasive way. The only satisfactory replacement material comes from fossil stocks of Mammoth ivory, which is also likely to be added to the ivory ban.

As the centuries have passed it is demonstrable that there is no premium in price for a bow with fragments of an elephant’s tusk on them against others. Most of them – well beyond  99% of them have no inherent value at all beyond what a musician is willing to pay for their playing qualities, and even their age doesn’t give them an inherent antique ‘premium’. Over the nineteenth and early 20th century more violins and bows were made than at any other time in history, and inevitably just as pianos had ivory keys, bows of this period mostly got ivory tips, regardless of whether they were intended for school children to play, or the expert-made bows that have incredible properties that support musicians today.

Importantly, these tiny parts are so small that there is no way to  re-work them and turn them into more valuable objects, so unlike hunting trophies and large antique ivory artefacts, they cannot be converted into things that support the illegal ivory trade, and they cannot be used as a way to get past restrictions and smuggle ivory that will be carved into decorative objects to support the insidious modern trade. By the 1970s, alternative modern materials became available, and bow makers saw the crisis looming on the horizon. Most of all, the people who worked with ivory by now were mostly small workshops or individual craftsmen living in a world where ecology and the environment went hand in hand with the values of musicians. This resulted in a voluntary moratorium across the trade of making bows with ivory parts which took effect with almost complete compliance. However, this could not address the issue of hundreds of thousands (probably millions) of tiny fingernail-sized fragments of ivory that are integral parts of older bows. Enough ivory to make the keys of a single piano would keep a bow maker in business for years.

As a violin dealer, I have some grasp of the extent of the problem and get to see it from a viewpoint that few musicians are able to. I have a realistic picture of the number of people who unwittingly own a violin bow with ivory on it, and of how many bows circulate in the ownership of musicians great and small. I understand that there will be residual problems for customs officers and other compliance authorities, because when we started to use alternative materials such as milk-based casein, or modern plastics, they still have a superficial appearance of ivory, so that any bow with a white tip is ultimately subject to suspicion, creating an untested problem when musicians seek to take their instruments across borders.

The government has already determined upon the credibility of the music industry’s claims for instruments made before 1975 with an ivory content of up to 20%. That is why they decided upon an exemption, rather than prohibiting their trade. That includes pianos, bagpipes, violin bows, bassoons as well as a variety of antique instruments that are found in museums and the incidental pieces of ivory that people decided long ago to put on the instruments they made.  However, despite our campaigning, the bill that passed through Royal Assent on 20 December 2018 requires DEFRA to organise the licensing of individual items, in turn making it a criminal issue for those who do not have the adequate paperwork.

We believe that this is a counterproductive compromise. The government agrees that our situation does nothing to support the illegal trade in ivory, and yet the proposed licensing regime risks criminalising owners of bows. We know that government and border agency resources are stretched thin, and that specific funding to fight ivory poaching will always be in short supply. We have serious reservations that the relevant agencies will be swamped by the scale of administration in issuing renewable licenses, just as customs and border agencies will be hugely burdened by policing the issue. All of this on an enormous scale will take vital resources away from the real danger of poaching elephants and smuggling through UK ports. The mayhem that is caused for musicians will be nothing compared to the absolute danger of undermining proper efforts to combat the evil trade of smuggling poached elephant ivory into and through the UK.

By signing this petition as a UK citizen or resident, you are doing everything possible at this time to bring forward an informed parliamentary debate on the registration requirement of the 2018 Ivory Act at a critical time that DEFRA is working out how to put law into practice. You are also contributing to the European Union debate on an ivory ban, which (regardless of Brexit) is following the lead from the UK. We strongly believe that a successful resolution of this part of legislation will play a crucial role in freeing up our agencies to combat ivory smuggling and help put an end to the slaughter of elephants.

Benjamin Hebbert is a violin dealer, writer and from 2017, chairman of the British Violin Making Association www.bvma.org.uk. In this role he is British delegate to the L’Alliance Internationale des Luthiers et Archetiers pour les Espèces Menacées / The International Alliance of Violin and Bow Makers for Endangered Species.