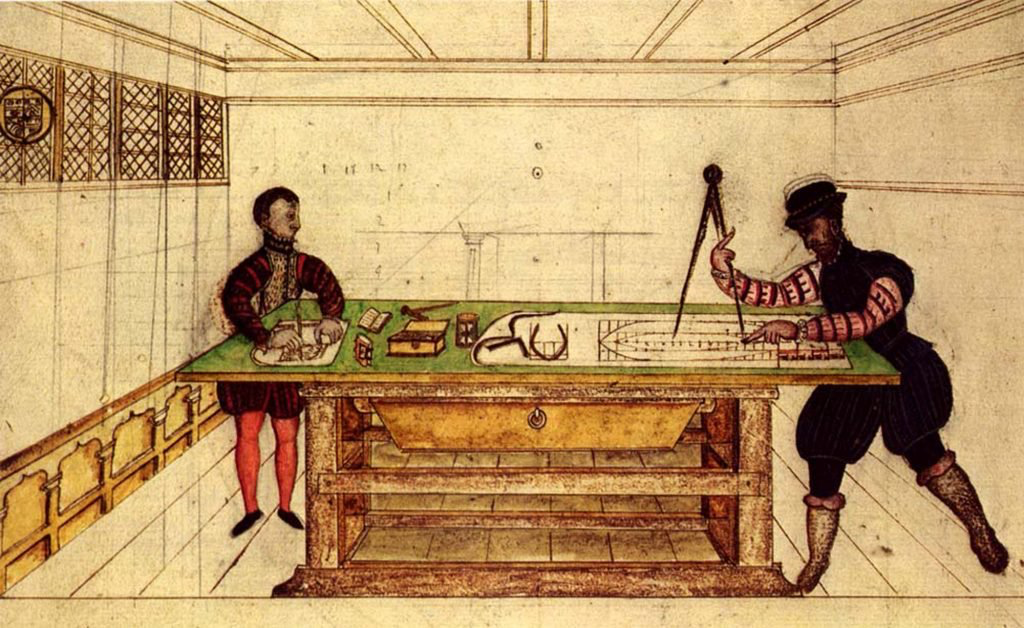 How did sixteenth century English viol makers negotiate the reasonably complex task of negotiating proportional ratios when they made their instruments. Whilst my research indicated that they favoured superparticular ratios that related to the harmonic series, if the task of achieving them was too complex for the Renaissance craftsman, the perceived requirement would throw into doubt my research findings. In this blog, I explore the plausibility and efficacy of putting forward a geometrical solution to this mathematical problem.

During my research into the form and geometry of viols, I was faced with one fundamental problem, the task of understanding how a viol maker was able to translate one measurement to another within the sophisticated design principles that I wanted to set forth. It is one thing to stare at a computer screen all day and make mathematical calculations, and another thing again to apply a standardised metric, as I did to my photographs, but building circles on Adobe Illustrator is a different matter entirely from the pen and paper or scribing directly onto the back of the instrument.

In fact, the whole protocol of illustrating complete circles is at odds with the way that an architect usually designs things, and one of the compromises that I had to make in this project was whether to describe circles as continuous lines or simply as arcs. Arcs are an awful lot more trouble to do on a computer, and circles do have the advantage of showing the full schematic, even if they overcomplicate the end result. I hope that anyone trying to interpret this data will be able to start from the point of understanding how a compass works, and the practical application of these essentially ‘invisible’ circles in establishing the necessary arcs and intersections.

In my computer aided design process, I started with my primary unit (in the case above, the red circle) at a predetermined size of 100 pixels, and worked arithmetically in order to express known proportions. In fact, by using this system, and plugging in the mathematically accurate numbers, I was able to ensure a completely accurate scheme to compare against the outlines that I had taken from old viols. When you look at my schemes you will always see some dissonance between the theoretical form and the actual outline, which accounts for the intrinsic inaccuracies of the viol making process, as well as distortion over time, and anything that occurs from the camera lens. When I started my investigations I painstakingly overlaid shapes onto the photographs, but I feel that the ethical way of delivering this is with a mathematically perfect structure and the resulting comparison.

My research quickly fell upon a problem. Even my arithmetical approach to proportion had a fundamental flaw that certain divisions and multiplications came to complicated decimals, which would be difficult to calculate without electronic assistance, so that even a maker with access to an electronic calculator would be troubled in making these kinds of calculations. This was made much worse by the seemingly arbitrary and variable measurements of each viol – all different from one and other – showing that the primary unit of measurement from which the design was expanded was both unique to each instrument and furthermore, was too variable to equate logically to any standard system of measurement – try dividing five inches into six parts arithmetically and you will see the immediate scale of the issue.

Hitherto, many of the studies on instrument forms had relied on measurements, and there was a sentiment within the geometry world (such as it was) that analysis based on this approach could yield results. The extraordinary work of Andrew Dipper and David Woodrow had been the first to do systematic computational analysis on Stradivari’s forms back when just to use a computer was cutting edge, and set the tone for much work during the 1990s. As a result, it seemed logical that this approach should yield results, and studies prior to mine had attempted to find measurable relationships between the principle dimensions of an instrument – the upper and lower bouts, the waist and the length. It took a quantum leap to understand that these may not be ‘rational number’ relationships – the narrowest part for example, proves often to be the intersection of two circles, and would not yield an elegant whole number relationship to any other measurement of the instrument.

With this in mind, a scientific condition of this research was to find an efficient way of translating the required proportions. If this could be achieved, then there was viability to my work, but if it proved to be impossible or particularly burdensome and difficult then it would put into question the entire premise of my research. Over and over again, the whole concept that I was working on was one in which an instrument could be designed with nothing more than a compass rule and set-square, as well as we shall see, what I have dubbed the ‘superparticular computer’ (3:4, 4:5, 5:6, etc. are called superparticular ratios, and I’m a bit of a geek like that).  As an example it is easy to bisect a line (2:1) and bisect that again (4:3), but as soon as you arrive at 5:4 (the five parts being the difficult bit) the division is much more difficult to do, and seemed beyond the rules of effective simplicity that I was looking towards. In short, I imagine a scenario for the design stage of viol making and instrument making in general that would be comprehendible to the sixteenth-century English scene of the shipwright’s drawing office as illustrated in the fragmented treatise on ship building by Mathew Baker dating from c.1586.

With this in mind, I set my focus on two directions. First I looked back to my time making  harpsichords and the skills I had developed in that field. Here we used a tool that we knew as a ‘carpenter’s rule’ to make equal divisions across the width of a keyboard whose width and individual key measurements did not necessarily (in fact, never) fit to a standard unit of measurement. (I am conscious that there are several quite different tools known as carpenter’s rules.) In practice this was simply using a meter-ruler and placing it at an angle so that a required number of units spread between the two ends of the keyboard plank. These could then be scribed in with the help of a set square set against the bottom edge, and the result was the desired number of equal subdivisions. Simplicity itself, and perfect. (A keyboard, as illustrated, is cut from a single plank of wood which needs to be subdivided for the keyshanks and separately for the total number of natural keys).

Although the carpenter’s rule is impractical for a system that relied mostly on the use of a compass, nevertheless it seemed to be on the right track as a tool for translating different measurements with relative ease. I would argue, for example, that this system is the easiest method to locate the fold on the back of a viol as 4:5 of the length if the instrument is not of a specific measured length. My next stage in my investigation was to hope that I could find some clues amongst mathematical and navigational instruments of the period, or in associated texts. My aim as always was to try if possible to demonstrate my theories using commonplace simple ideas. Objects like the column-shaped Shepherd’s Compass (to the left in the detail of Holbein’s Ambassador’s, below) fascinated me, as I began to perceive the kind of scaling that I was thinking of. These function differently, they are not what I was ultimately looking for, but enough to get my mind racing.

Another obvious path was to look at what painters were doing, and artistic formulas for perspective and scale. I am normally sceptical about racing to the great works of a given time just because they are well known to 20th century art historians, since their retrospective significance may have little to do with their dissemination at the time they were published or written (who, other than Leonardo da Vinci made use of his codexes in his lifetime?). Hence in reaching for Albrecht Dürer’s Institutonum Geometricarum (Paris, 1535) to explain English design phenomenon has to be done with a little caution. With this in mind, it was pleasing to see that at least one craftsman in England was sufficiently engaged with it that the interior of Mathew Baker’s design office is clearly modelled directly from Dürer’s own studio, the final engraving of Dürer’s treatise, complete – unless IKEA is an earlier phenomenon than we recall – with an identical workbench to that in Dürer’s own idealised studio. 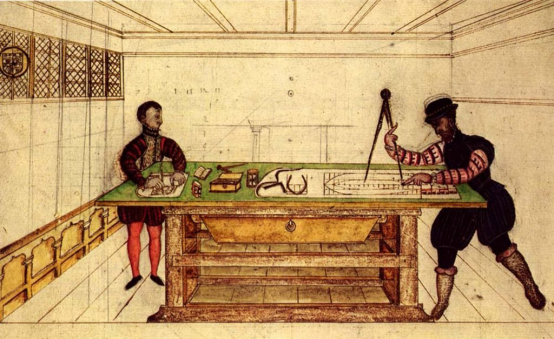 Baker’s drawing office goes further in its investigation of Dürer’s principles with its experimentation on perspective. The various construction lines and the emphasis of the vanishing points on the back wall seem to indicate that he was experimenting with a perspective that he was unfamiliar with. It is interesting to see a craftsman drawing in this manner. It should be noted that painters of the English school were entirely familiar with these techniques. 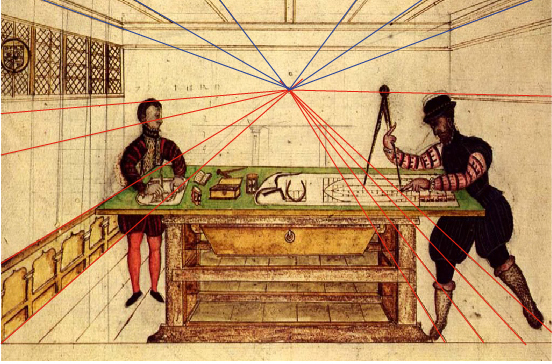 Various tools and demonstrations exist in Dürer’s writings that relate to an idea of using these kind of converging lines as a way of scaling objects, but these are more sophisticated than the task in hand requires. Perhaps the tool in question was sufficiently simple to someone versed in geometry that there was no specific need to demonstrate it within a book at the level of Dürer’s.

Overall, the experience of looking at Dürer’s work through the lens of the craftsman / shipwright, Mathew Baker, gives us the tools for the job.

Such a set of lines converging on the same point could easily be drawn or scribed on a wall, a bench top or a board, and with the x-axis along an edge so that a set-square can be run along it in order to ensure that the compass remains perpendicular when working with proportions. It is simply a matter of running the compass set at a particular measurement along the x-axis until it intersects with the line of the appropriate value, i.e. 2, and then extending it perpendicular to the required value, i.e. 3, in order to make the intended transformation, regardless of the unit of measurement.

At this point it is possible to take any arbitrary unit of measurement and expand or contract it by any whole number relationship. It serves as a plausible technology for the craftsman and the designer, and it completely negates an arithmetical approach to defining measurements. Most importantly, though I am yet to find specific evidence for its existence or use, it fits perfectly within the environment and technological proficiency of art, design, craft and architecture in which these instruments reside. For my project on viol geometry, finding (or reinventing) the superparticular computer represented a major breakthrough in the plausibility and efficacy of my research methodology as it proved that the technology was available at the time for instrument makers to perform otherwise complex multiplications and divisions with the use of basic geometric rules.

In way of a postscript, the Talbot Manuscript written in Oxford over a number of years between 1680 and 1709 includes a scaling chart for organ pipes, presumably produced by Renatus Harris the great organ builder of the period. It shows precisely the same mechanism. It does not prove that viol makers used this exact method, but it does prove that within the same culture other musical instruments applied the method for other tasks. 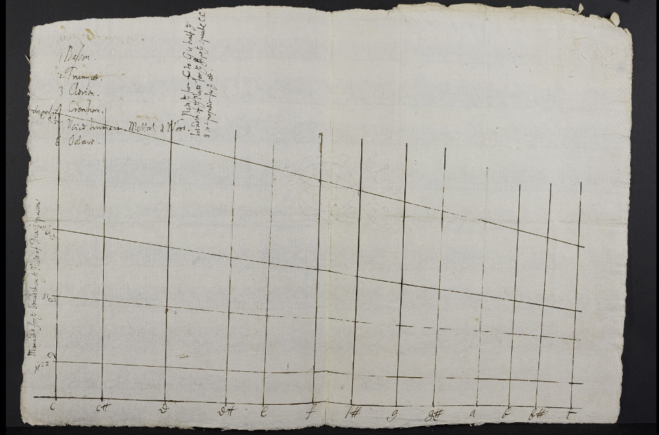 For more reading on Benjamin Hebbert’s The English Viol Project:

An English da Vinci Code? MMA 1898.44: An early Viol by John Rose in the Metropolitan Museum of Art